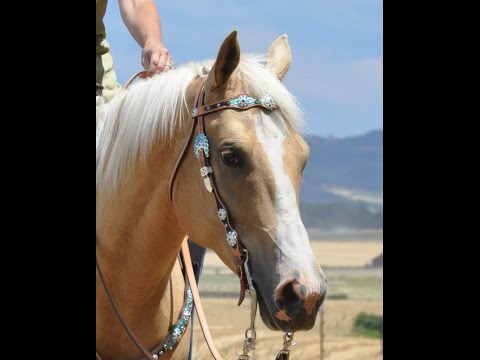 Her captor appears brandishing a leather riding crop. He orders her to present her posterior for a few punishment swats- but it is clear that his intention is to force her to wear the hated pony harness!

He lays it down on the floor in front of her and unchains her collar- just so that she can stand up and put on the outfit.

Obedient now she locks the head harness on herself, feeling herself start the transformation into a full pony slave.

Piece by piece she dons the heavy black leather harness, each step sending her further and further down the road to submission.

When she is clad her captor helps her into her riding boots, then clips a leash to her collar and leads her from the dungeon through into the pony exercise yard.

Once again he goes through the rules, and explains that she is to be trained to walk elegantly in the manner of pony dressage. Exactingly and precisely there follows an extended pony training session as Ariel learns the tricks and presentation she will require as a dressage pony girl to make her master proud!

The trainer punishes her when she falls short of the required standard, whipping her breasts and ass with the riding crop. She talks too much so she is gagged with a bit gag even when there is a rule against unsolicited talking.

The session ends with some position training before Ariel is taken back to her dungeon and chained up, still in her pony harness, to sleep for the night.

Still in her pony girl harness, head harness and bit gag, the trainer chains her to a chain with heavy steel chains. Once she is securely fastened he adds clamps to her already sensitive nipples, making every slight movement into a painful experience for the recalcitrant submissive.

Once he has her proper immobilised, it is time for pony girl feeding. He lays out a bowl of oats and a bowl of water for her and bids her to eat and drink her fill.

But how is she even going to be able to reach? She certainly cannot use her confined hands. But her trainer is generous and holds the feeding bowl in front of her so she can nuzzle up the oats and lick water from the bowl to quench her thirst.

Her humiliation knows no bounds as she begs him to let her have some more, yes please sir! Although she DOES seem to be mostly eating the chocolate treats, not the nutritious oats!

After feeding it is time for her to do the chores. He unchains her but padlocks her hands behind her back and gags her once again.

She must clean and tidy the whole kitchen and do the dishes with her hands bound behind her. Then it is time to return to the prison cell.

She must learn patience and endurance, so he chains her standing with her hands chained above her head.

How long can she endure the standing torture stress position? As long as she must: all night! She is so grateful when he returns to release her at long last with the day of the new day.

If she behaves better, tonight she will get a nicer sleeping environment. He takes her up to the bathroom. Time for this pony girl to get a wash and rub down!

She is stripped naked and must shower in full view of her trainer, to her further humiliation. Does she remember the steps he taught her yesterday?

Still in the bedroom she is put through her paces as he assesses her performance. Then it is back down into the kitchen for more chores.

She must prepare tea and coffee and breakfast for them both, but she is of course not permitted to join him at the table straight away- she must kneel and await permission, and punishment with the riding crop for the minor mistakes she has already made this morning.

Then she is permitted to sit at the table but must once again eat without using her hands which are cuffed behind her. It is so much worse having to do it in front of a person who is eating normally!

Supposedly broken in and domesticated, Pony Girl Ariel is doing her household chores, washing up in her full pony harness.

But she cannot resist taking off her head harness and attempting to flee! She grabs her overcoat from the hook and runs through the house to the door.

It is unlocked! She is free! But her trainer knows full well that she is not yet truly resigned to her fate. As soon as she steps past the boundary of the house, a nasty surprise awaits her- for the collar locked into her elegant and slender neck is a shock collar and it automatically triggers!

Ariel is immobilised by the awful voltage and drops in her tracks… and the trainer is right there. The next thing she knows, she is on her back inside a narrow cage.

Her feet protrude through the bars at the top, and the trainer strips her of her boots and uses a spreader bar to keep her ankles spread- and also to prevent her being able to withdraw her feet back into the cage.

You can order the nose band part of the jumping hackamore and convert any of your bridles that way too! So cool : Sydney- Notice I said head set not collection.

Big difference in dressage! I had specific cues for Bodhi to bring his nose up and down that now we must relearn.

I think it is a bit presumptuous and just wrong to think I was talking about collection. Bodhi will need to learn new cues from the nose before I have that adjustabulity back.

I could have done without the lecture! Collection is a looong way away for us we still have Rythum, Relaxation, contact where I am having to retrain , Impulsion what you are talking about coming from behind!

He looks adorable as usual. I can't really comment on bitless as I have never used one and don't really know all that much about them. Good luck with it.

My British dressage trainer taught Satin and I to use leg cues for her headset and collection. I stopped relying on the snaffle to "pull" her in to collect, and instead she learned to feel my seat and leg "push" her into collection.

But I don't think you can be collected without that vertical headset, can you? My instinct says that if the head is not collected, neither is the body.

But maybe that's not correct. I can't believe he's only 5 and he's such a good boy! You taught him well! Yeah to get collection you want the horse to be "between the aids" or to push the horse into the bridle as I have always heard it.

You never want to "pull" like you said which makes sense if you want impulsion from your horse. I really love all of Jane Savoie's lessons and she says to imagine a basketball in your lap keeping your hands from going back and pulling.

I do well with the visuals myself. I have no idea about the head set and collection. I know a horse that is not round through it's back or on the forehand could not be collected.

Your instincts are usually correct so sounds good to me. Bodhi and I are a long way away from worrying about collection! I started my gelding with a sidepull and I'll use it on my mare when she consents to letting me ride her.

It's one of the western style ones with the stiff rope that goes over the nose. If I rode differently it might have rubbed him but I taught him very early on to listen to my legs and seat and the rope never even moved his hair.

It's all in how you use it. BTW- we're way too early into training to worry about headset or collection either. Good luck! Tuesday, June 15, New Bitless Bridle!

Got a new bitless bridle for Bodhi in the mail yesterday!